I’ve recently re-started my blog and now have a lot of new followers who I would like to get to know me better. Since I am 23, I chose to give 23 facts about myself!

I hope you all now know a little bit more about me. I would love to get to know you all a bit more as well!

Last week I received my second Self-Care Subsciption box. The last one I got was the May Bee Slow box that had all things sloths, including a tumbler that has an absolutely wonderful sloth based pun that I genuinely use every day!!

It is a subscription box with a difference! It is run by one person (Merida) who carefully plans everything that goes into each box every month. She herself suffers from an invisible illness and came up with the idea to help others that are fighting invisible battles.

There was two choices with this months box, stay-cay or vay-cay. You could choose which theme you wanted. I chose stay-cay, mostly because I like the idea of practising self-care at home and having some lovely homely scents. I wasn’t disappointed in my selection!

Included in the box was a lavender candle which I love because lavender makes me sleepy (and when I’m working as much as I am at the minute, I need help sleeping!). It also included a lovely novel, bath bomb, body scrub, a pair of socks and a crochet starter kit! It’s more than enough to keep me busy this month!

I’m really looking forward to getting my next box (which includes STATIONARY!!!!!!!) and really recommend it to anyone! There’s also Teen’s and Children’s boxes available for those little ones in your life!

NOTE: talk of nausea and vomiting

A few years ago I suddenly became very unwell physically. It was in the middle of exam season in my second year at university so being sick was the last thing I wanted. It was originally put down as viral gastroenteritis but it went on a little longer than would normally be expected. I basically lived in my GP surgery and the local A&E department. All tests came back clear, like there was nothing wrong when there clearly was. Eventually, when all other options were ruled out, I was diagnosed with cyclical vomiting syndrome (CVS). 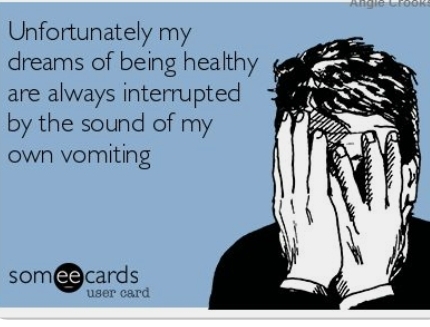 CVS is a rare disease that is mainly seen in children. It is also referred to as an abdominal migraine. It is characterised by intermittent episodes of vomiting and nausea interspersed with periods without any symptoms. This cyclic nature between phases is what sets CVS apart from other gastrointestinal disorders. The exact cause of CVS is unknown currently.

Prodrome Phase- In this phase, the person may feel like an episode is about to start and have intense sweating and nausea that lasts a few hours and can appear pale.

Vomiting Phase- In this phase, the person can experience vomiting and retching which can last for up to 30 mins, and can vomit up to 6 times an hour for potentially 10 days and they could be unresponsive and unable to move. Other symptoms may appear at this time including headache, fever, abdominal pain, sensitivity to light and drowsiness.

Recovery Phase- In this phase, the vomiting and retching stops and the other symptoms subside. This can be immediate or gradual.

Well Phase- This is the phase in which the person experiences no symptoms.

The exact cause of CVS is currently unknown but it is thought to be linked to migraines. Vomiting episodes can be triggered by a number of things including:

It is very important to manage vomiting phases to try to limit the length of time it occurs for and the complications that can arise. It can sometimes be a good idea to stay in a dark room and take any medication that is prescribed. Taking small sips of fluids such as water, diluted squash or diluted fruit juice is important to ensure that dehydration does not occur. I was told that if it stays down for at least 5 minutes, your body has absorbed at least some of it.

Once the vomiting episode has passed, continue to drink plenty of fluids and gradually resume normal diet and take any medication that is prescribed to prevent future episodes.

It is possible to prevent or limit the impact of vomiting episodes, especially when you get to know your condition. Knowing what triggers your episodes and avoiding/ reducing these as much as possible is one of the most effective methods.

There are a number of complications linked to severe vomiting episodes such as dehydration, tooth decay and inflammation of the oesophagus.