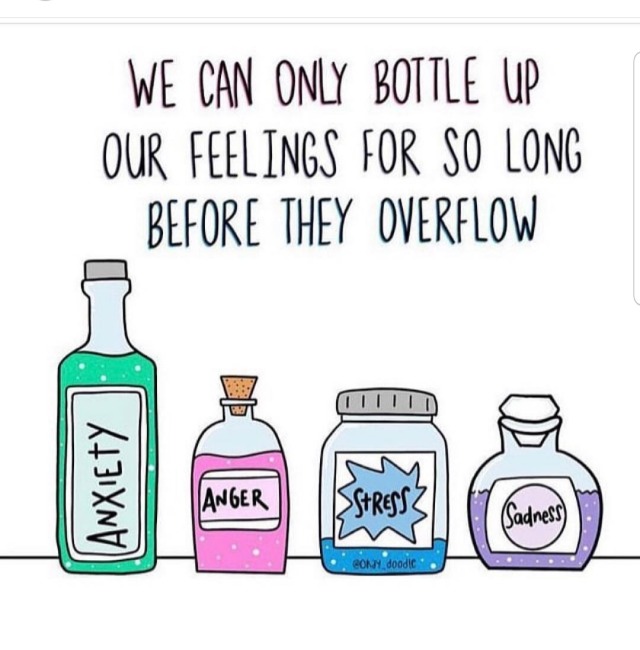 We’re always told to not bottle up how we feel. I can’t count the times I’ve said it to friends when they’re struggling to find a solution to something. Even then I operate a “do as I say not as I do” policy!! I have the biggest culprit of bottling things up I’ve ever met.

I have always put it down to being an only child. After all, if something went wrong and you didn’t want the parents to know, you didn’t have anyone to talk it over with. So that’s kind of how I approach my coping with mental illness. I don’t tell anyone until it’s too late.

Lately I’ve had a lot going on.

I took a group of girls to Portugal with Girlguiding Ulster. I thought it might be a bit challenging but overall enjoyable. Boy was I wrong. As first aider I was never off duty. It seemed every time I turned my back someone had fallen or started crying with homesickness. Then there was the trip to hospital and the constant phone calls to parents and our home contact. I was physically, mentally and emotionally exhausted. I went back to work after and joked that I needed 3 weeks off to recover from my week and a half off!

Within a week of coming home from Portugal, I had guide camp with my own guides. This was a lot less stressful, even though I was organising it. The most stressful thing was discovering a small fire when we returned to site after a few hours away and quite a lot of damage I hadn’t budgeted for. But even that turned out ok in the end.

It was my dad’s big birthday that weekend so I was planning the surprises for that in the background. I hadn’t had a break after Portugal at all.

Last week, I had a job interview on Monday morning, two nightshifts and my cars MOT and a CPN appointment scheduled for Wednesday afternoon.

This was when the proverbial hit the van. My appointment was cancelled as my CPN was off sick. Suddenly everything that I’d bottled up for the past few weeks came out. And not in a good way.

I was making real, serious plans to end my life. It was scary just how quickly I fell apart. I mainly remember sitting on my stairs after I told some friends I couldn’t go out the next day in tears. I just couldn’t face them or tell them what was going on.

I went into the living room and sat on the sofa beside Rose. Next thing I remember it was 3 hours later. I wasn’t as raw or in as much pain when I woke up from my nap. Being a lazy bitch saved me!!

I’ve still been having the odd thought now and then but they’ve not been that strong again. I was genuinely scared at how quickly it came over me and how low I got.

Now my task is to start listening to myself when I say not to bottle things up and to put steps in place that will hopefully prevent me getting to that point again.

More amazing gifts from lovely humans on Twitter 💛 As much as I love receiving things, I love that people are getting things I ordered for them. I really hope it can bring a smile to someone in these crazy times!! #coronakindness #spreadjoy #spreadingjoy #wishlish #books #bookworm #reader #reading #nevergonnarunout
Finished this book last night! As a fan on Bones, I have really enjoyed getting into the books that inspired the TV show. The first two haven't disappointed me. Anthropologist Brennan never seems to have a smooth sailing and this second adventure had me even more hooked than the first. Can't wait to start the third Rating: 📖📖📖📖 #reading #read #book #bookreview #bookreviews #bones #tvshow #kathyreichs #deathdujour #reviewbooks #whatelsecanido #toberead #list #selfcare
Been loving treating people on Twitter who are sharing their amazon wishlists. It's nice to provide some joy in these weird times. And its lovely that some people have got things for me from my wishlist! Thanks @caralisette and everyone else who started the Twitter threads!! #books #spreadingjoy #wishlist #putitforward #spreadjoy
Finished this book today! I love medical books, its one of my favourite genres to read and this one was really good. The stories of life on the edge that were amazingly written kept me hooked as I read it. Really recommend for anyone interested in these kind of books!! Rating:📖📖📖📖 #books #bookworm #reading #read #sevensignsoflife #medical #medicalbooks #intensivecare #doctor #nonfiction #nonfictionbooks #nonfictionbook #bookrating #bookreview #bookreviews
Absolutely loved this book!! Full of the best of the hosts of one of my favourite podcasts, even if it took me a little longer to actually read it! Totally recommend it for any murderinos out there!! #book #books #read #nonfiction #myfavoritemurder #mfm #mfmpodcast #staysexyanddontgetmurdered #ssdgm #truecrime #truecrimepodcast #podcast #recommend #murderino #mentalhealth #mentallyill #chronicallyill #selfcare #reading #bookworm
Had a great time away in Amsterdam checking out the new city (well what was open, thanks corona)! Missed the dogs loads and from the reaction I got I think they missed me too!! #tripaway #travel #amsterdam #holland #netherlands #europe #citybreak #whatpandemic #coronawho #adamlookout #walle #ripleys #believeitornot #bodyworlds #bodyworldsmuseum #bodyworldsexhibit #bodyworldsamsterdam #ripleysbelieveitornot #redlightdistrict #redlightdistrictamsterdam #walkingtour #legswalkedoff